After Being Caught on HOT MIC, Race Baiting Democrat Walks it Back

A Democrat long known for radical incitement of her followers and extremely public, shameless calls for mobs to confront Trump Cabinet members and supporters is desperately trying to walk it back. All the while she rails for President Trump’s conviction… of her crime.

The moment after calls for President Trump’s second farcical impeachment for “incitement” began, conservative media outlets flooded the internet with numerous reminders that the DNC have incited violence for the last four years with far deadlier and more costly results. By far the most notable was that of Congresswoman Maxine Waters (D-CA). Today Waters is feverishly denying having ever encouraged violence against members of the Trump Administration.

“As a matter of fact, if you look at the words that I used, the strongest thing I said was tell them they’re not welcome,” the California Democrat told MSNBC’s Ali Velshi after he asked if she ever “glorified or encouraged” violence.

“Talk to them,” she recalled saying. “Tell them they’re not welcome. I didn’t say go and fight. I didn’t say anybody was going to have any violence. And so they can’t make that statement.”

Oh, Maxine… the internet remembers… and so do we.

“You think we’re rallying now? You ain’t seen nothing yet,” Waters said at the event in Los Angeles in 2018.

“Already , you have members of your cabinet that are being booed out of restaurants. Who have protestors taking up at their house whose saying ‘No Peace, no sleep. No Peace, No sleep!’ And if you see anybody from that cabinet in a restaurant, in a department store, at a gasoline station, you get out and you create a crowd. And you push back on them, and you tell them they’re not welcome, anymore ANYWHERE!”

Let’s break down the Democrat Congresswoman’s comments. These legal definitions vary by jurisdiction but are generally recognized nationwide. (Please note: the author is not a lawyer and this doesn’t constitute legal advice) Water’s entire statement is legally considered incitement as she is clearly advocating for those listening and watching to commit offenses.

Shortly after the video broke, Vox wrote, “Pelosi has gone after Waters, too
It’s not just Republicans who seem uneasy about Waters’s calls to action, however. In a tweet Monday morning, House Minority Leader Nancy Pelosi appeared to criticize Waters as well.” referring to Waters’ comments as “unacceptable” according to CNN.

“The people who claim tolerance seem to be the most intolerant in this process,” House Majority Leader Kevin McCarthy said during a Fox News interview, adding, “We need civility in this country, but the idea that you’re asking people to go forward, that becomes very dangerous and it becomes a risk inside our country as well.” McCarthy also called Waters’ comments “Extremely Dangerous”

The American people must remember this and every other incitement to violence the Democrats have made since 2016 in detail in the months ahead as not only President Trump, but all of his supporters are literally and figuratively put on a sham trial. 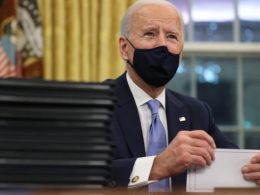 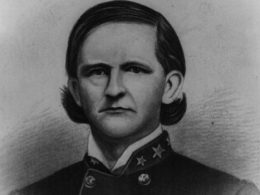 In an extremely rare Bi-partisan act, Republicans in Georgia led the repeal of the state’s 1863 Jim Crow…
byMatthew Holloway 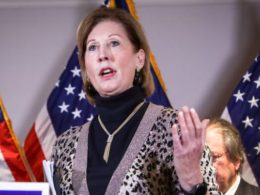 On Friday, Sidney Powell announced that the Trump campaign legal team will likely begin sharing evidence with the…
byAnastasia Boushee